A Fijian Welcome | Sailing West Around The World

After a lumpy enough passage from Tonga we arrived into Vanua Balavu, the main island of the Northern Lau Group of Fiji.  It was extremely tricky navigating in and around the reef that encompasses this stunning island and we were grateful to have Eddie Scougal and Debbie Johnson, Oyster Rally organizers, on board for our entry.  The charts were way off… well, as in half a nautical mile off, which when you’re navigating around a reef with about half a boat length of room for error this can have serious implications.  We waited till first light to make our approach.  Most of the navigation marks charted were absent and those left were unlit so it certainly wasn’t an option in the dark!

In summary: Reef + poor bouyage + very little room for maneuver + charts off by half an nm = serious potential for disaster!!!

We slowly crept in (as in 0.5 knots boat speed) along the first transit with seven other oysters behind following our line.  I was on lookout from the bow, Eddie Scougal on the helm, Debbie on radar and Paul piloting using all available means of navigation.  It’s at moments like these that you’re grateful to have two sisters’ opticians who kitted us all out with Maui Jim sunglasses (a la Eyeworld) for this trip!!  Polarized sunglasses are the only way to go when negotiating reefs and coral heads, or bommies as they’re aptly named! In fact this is the first piece of advice listed in the Fiji Pilot book!  Ideally the best time to cruise in reef/shoal waters is in the hours between 10am and 3pm when the sun is high in the sky.

Finally, after an hour of ghosting along this reef, we reached the most magnificent anchorage surrounded by dramatic cliffs and lush tropical growth.  Debbie breathed a sign of relief; this certainly was worth the huge effort she put in to get a temporary port of entry set up for the fleet at this outer island.   This is a first and something that the Fiji border agency will look to make permanent.  The local villagers would truly welcome this move and it will give them a source of income by setting up marine services and supplying consumables to cater for international yachts.  Over 600 yachts visit Fiji annually spending a combined $15million USD (Marine Survey 2012) and very few of them visit the Lau group as it’s upwind of the islands where you normally clear customs.  We certainly wouldn’t have sailed back upwind. After 14 thousand miles of sailing we’ve only sailed upwind for 80!!!  It’s downwind sailing all the way baby when you’re sailing west around the world through the tropics!  Remember we’re all about cruising on this trip!!!  We’ll leave the upwind sailing to you lot back home 😉

The people of Daliconi, a village on Vanuabalavu held a massive reception for the Oyster Rally fleet.  They were so proud to have such a prestigious fleet of yachts anchored off their island.  This reception was the most moving experience of my life.  Initially we presented the village chief with some Kava root, which is customary in Fiji, for the sevusevu ceremony.  The chief then welcomes you in a small ritual involving drinking the gifted Kava after it has been ground down. The villagers went to huge lengths to throw this party and ceremony for us.  They had been preparing the village and plans for months and you really got a sense of this when the organizing chairman, a massive Fijian man, stood up to thank all the villagers for the effort they put in preparing for this.  He could hardly speak from emotion, I have never seen a man so choked in all my life.  This meant soooo much to them.

As part of the celebration the kids dressed in traditional costume and put on a great show of song and dance.  Huddled in the corner were the teenage lads playing mandolins and singing in perfect harmony.  The women served beautiful lemon leaf tea and had jugs of milk there, as they thought that to be the correct thing for us ‘Westerners’ with our tea!!  Now this was hot water infused with a lemon leaf, not something you’d want to add milk to!  They had made lots of little pancakes and were so unbelievably proud serving them to us.  The previous night they’d prepared a massive delicious seafood spread over by the first anchorage, as there had been a lot of rainfall we couldn’t make it to their village that day by land safely.  We then sailed to Daliconi for the ceremony the following day.  Honestly, this was an enchanted place with the most beautiful selfless people.  There was an innocence and giddiness when they interacted with us.   In their eyes was a deep level of appreciation and gratitude that I’m really struggling to put into words here.

They kept getting us all up doing the conga, like I’d just sit down for a rest and they’d have you back on your feet (it seams they don’t tire of this particular party piece!).  They then got us into a massive circle with everyone hand in hand, moving in and out just like back home at the end of a wedding, however here with a few cups of lemon leaf tea inside us dancing around on the grass seamed quite childish and sure what harm is there in that?  We all started to get a bit giddy and silly!  I wonder what would happen when I return home and start doing the conga after a cup of tea??  Maybe ye should try it?  What the heck… you only live once and all that!!

We have cruised Fiji for a few weeks now and the celebrations in Dalconi will certainly be our most enduring memory of this beautiful country with over 300 islands.  How lucky are we to be travelling around the world by boat?  You get to places no one else can go, no tourists, no resorts, just untouched unspoilt islands, villages and people that have very little idea of what’s outside their island.  People who don’t take themselves too seriously

and just live day-by-day taking pride in where they’re from. Most importantly, they don’t see themselves individually or as a family but rather as a community where giving and sharing takes priority over taking and receiving.  People who are grateful beyond measure for what they have which really materially is a whole lot less than what we have but spiritually and emotionally they are far richer for it.  One Life…. Please Live it! 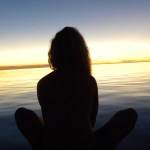 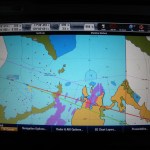 Just shows you the potential pitfalls of electronics! The pink Radar is accurate and the land way off!!! 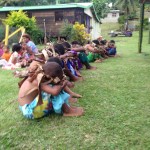 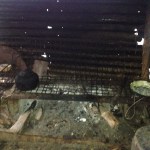 A typical oven on the islands. Basically just an open fire! 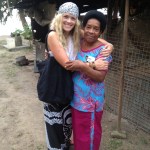 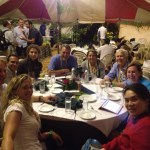 Audrey with a group of international dentists at a business conference in Vanualevu where we raised $100,000 US Dollars to set up a dental and health centre there!! 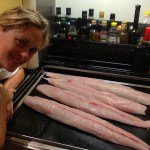 Four massive fillets of Wahoo prepared in the galley! 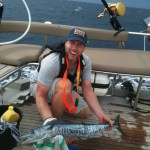 Paul lands a Wahoo and fed him a good slug of perno to speed up death. Looks like we’re finally getting the hang of this fishing! 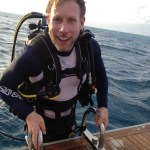 Jac Cousteau eat your heart out! 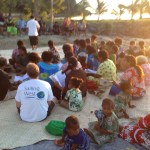 SevuSevu on Makogai island. We happened to arrive the same day as the Minister for marine just in time for a mighty party that night. 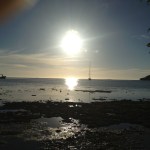 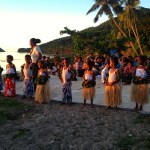 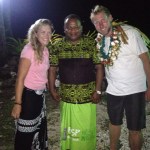 Audrey and Paul with the Minister for Marine at Makogai island. He was so interested in us and our views on improving cruising in Fiji. A far cry from the experience we had with Irelands Minister, Simon Covney who sadly does not care about sail training in Ireland. 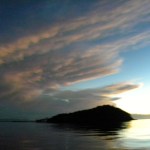 A stunning pic of Makogai island with clouds thickening