Ascension Island, another jewel mid-Atlantic! | Sailing West Around The World

Yesterday evening, after 4 and a half days at sea, we reached the tiny volcanic mass of Ascension island, an island, north of St Helena, famous mainly from his military history. This island is approx 1,600km from the coast of Africa and 2,250km from the coast of South America, pretty much in the centre of the South Atlantic Ocean.

It is a British island used by both British and American military over the past century. A vital communication centre in the Atlantic, Ascension has a BBC World Service relay station at English Bay. Cable & Wireless established an Earth Station here in the 60s for the ever expanding satellite communications network. NASA were here in the 60s running the Apollo space programme. A runway and refueling stop built here for US aircraft 40s has been in use ever since. Ascension became essential to the Brits in the early 80s for the war in the Falklands, hence there’s a large Royal Airforce base here too.

800 hundred people live on Ascension, however no one can stay here permanently and locals are based here for work reasons only, unless they are under 18years of age. It’s a pretty treating island to approach by sea with aerials and antennae, towers and dishes adorning every hill and mountain top, testimony to the communications and military work here. As always the LUSH crew were delighted to drop anchor and celebrate another passage at sea along with new landfall. We were greeted by a load of turtles in the water around us, who come here from Jan to April to breed and lay eggs on the pristine beaches. These Green Turtles have come all the way from South America and make the mammoth journey every 3-4years.

Out of hours to clear customs last night, we passed our time away at anchor playing cards and fishing (catching 3 Black Jack fish!!) under a very starry twinkly sky! This morning LUSH was surrounded by hundreds, if not thousands, of BlackTrigger fish!! Donning our snorkles and diving into the tropical water (29 degrees C) wasn’t a difficult decision for us, and a great start to our time here in Ascension. 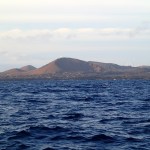 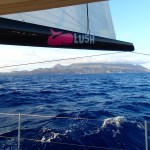 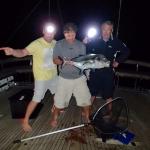 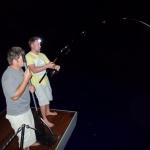 black jack give you a good fight 1 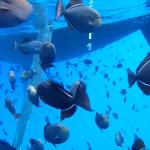 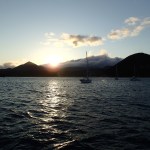 Sunrise over the middle of Ascension Island