Blue Whales – The largest animals ever on Earth!!! | Sailing West Around The World

Blue Whales – The largest animals ever on Earth!!!

The Azores, islands in the mid north Atlantic, are world famous for their numerous populations and varieties of whales. Although we’ve sailed the world’s oceans we have rarely got close enough to have a right look at these giants of the sea. The whale we’ve seen most on the trip is the humpback whale, which I previously blogged about. Never in my wildest dreams did I think we’d see a Blue Whale!! I always thought they were either too far south or north and nowhere near our latitudes. Luckily, I was wrong and for two months every year the Blue whales leave the Arctic and come to the Azores.

The Azores has a history of whaling and in the past killed Sperm whales until it was thankfully banned in the 80s. We hopped on the rib of a local whale watching tour group (Horta Cetaceos) with Pedro, Ricardo and their team of volunteers, from world organizations such as Sea Sheppard’s, and went to sea in search of the Blue Whale. We blasted through the ocean for miles in between the Azorean islands following instructions from whale watchers ashore, on the VHF. These guys spend their days looking through binoculars from various vantage points around the island and relaying info on whale sightings to Pedro and his team. Pedro is passionate about his whales and it was an absolute joy to go sea with him on this mini exploration!

A voice came over the VHF. some whales had been spotted to the south of the island. The whale watcher could also see our rib and directed us towards the blue whale! Wow this was a surreal moment… to see a Blue Whale, the largest animal to ever live on earth!! It is bigger than the biggest dinosaur!!! Imagine that!! .. And there we were in a rib within meters of this creature, 30 meters in length and around 200 tons in weight, that’s longer and over twice the weight of LUSH!!!! I was in awe, motionless, speechless. His blow shot up 12 meters into the air and really did stink!! We had tried to stay a safe distance from him but he was curious about us and swam around our rib and then under us. His body went on and on, it looked like a submarine coming to the surface. Under the water it has a beautiful blue colour, hence the name, and when it comes to the surface the whale is actually grey in colour.

Blue Whale Facts
Largest animal ever on planet earth!
Their tongues are the same weight as an elephant
Their hearts are the size of a small car
Some of their blood vessels are so big you could swim down them They eat 4 tones of krill per day
They cruise at 20 knots
Their tails are the length of a small aircrafts wings

Words and pictures don’t do justice to the experience we had on the water that day and the enormity of this animal. How fortunate are we to have come that close to the greatest animal on earth? And we only saw about 5% of the whole whale!! The hairs stood on the back of our necks for some time after that. This was a moment in time, one that we will cherish forever. Pedro brought us to see some massive fin whales along with humpback, sei and sperm whales after that educating us on all sorts of weird and wonderful whale facts. Amazingly, so little is still know about whales even with all the technology available today. It certainly does make you stop and think! Without doubt we still have a lot to learn about our sea-life and much yet to do to protect them and secure their future.

One Life.. lets look after and preserve it!

PS We’re currently three days east of the Azores on LUSH and have two days left to go till we land on mainland Europe!!! It’s been a grey and windy passage thus far!! 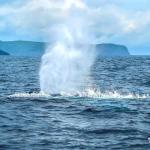 this blow is 12m high 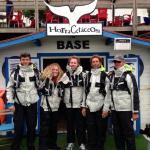 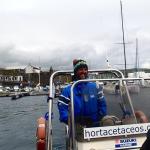 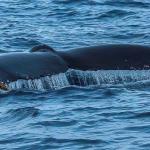 humback flukes just before a dive 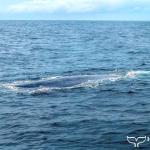 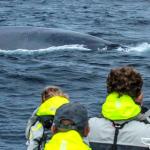