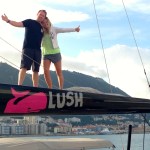 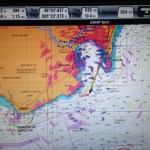 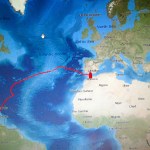 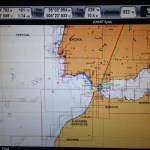 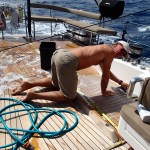 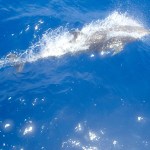 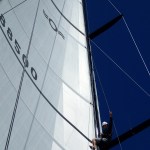 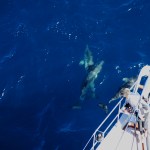 Audrey looking on as dolphins play on bow-wave. Overhead pic taken by Alvie up the mast.

At 2300 a day ago (May 19th) we arrived in Gibaraltar after a five day crossing from the Azores, mid Atlantic.  There has been just four of us for this final bit, Paul, myself, Alvie and Ian.  Due to a weather delay in the Azores we ran out of time for Richie to complet the passage and so he finished his trans-Atlantic on a 747! Richie, we have missed you!!  Honest!!  Although I can’t say our sentinments are the same for that tin whistle of yours!!!

Our whale pursuit continued, and each time we came near we hoisted Alvie up the mast to try and get some decent pics of them.  We had more Blue Whales and finn whales on route but we were no where near as close as we got in the rib back in Horta (Azores).  Still though Alvie enjoyed his mast adventures and did manage to get some decent dolphin pics at least!  See below for yerselves.

It’s been a pretty grey passage in fairness, in fact since we left Antigua we’ve only had about four decent days of sunshine and blue skies otherwise it’s been grey and overcast.  Thankfully our final night at sea was cloudless and we had the most beautiful starry night before the moon rose and brightened the stunning sky.  On nights like that I just love being on watch and can’t help marveling at this wonderous universe!  The dolphins on this trip have been awesome and I can certainly say the North Atlantic dolphins are the friendliest in the world, staying with us for ages at a time jumping through LUSH’s bow waves!  Incredible!

On arrival we’re shocked and saddened to hear such drastic news of a yacht that got into trouble in the Atlantic a few days after leaving Antigua.  The four crew abandoned their yacht Cheeki Rafiki to a liferaft.  The search for them was initially cancelled after two days which is absolutely crazy!!!!!  These guys can survive for longer than two days in a liferaft and thankfully the search has resumed.  It is still possible these guys are still alive!

On hearing news like that it does make you realise the unfortunate potential and danger of the ocean.  For all its beauty and romance the sea can still be a tough and unforgiving place.  I am so grateful to have made it back to European shores safely thanks to captain, crew and a well built yacht.  Our thoughts and prayers go out to those sailors, hopefully still alive somewhere….