On route from La Reunion to South Africa (Day 2)

After some serious trekking, mountain climbing and canoying in the magnificent French island of La Reunion the Lushous crew are at sea once more. This is the passage we’ve been most concerned about since planning our circumnavigation. The most popular route for circumnavigators throughout the century has been to sail up through the Suez Canal and into Europe. Unfortunately this route is no longer a safe option due to Pirates on the East coast of Africa, especially Somalia.
Now as I’ve mentioned on previous posts the further west you sail in each ocean basin the more weather you’ll encounter. Certainly this proved to be the case between the Caribbean and Panama (North Atlantic), and between Vanuatu and Australia (South Pacific) and now in the Indian Ocean we expect the same only this time there are a few more factors to consider.

1. Freak Waves off Madagascar
The weather in the vicinity of the southern tip Madagascar is “often unsettled” due to the extended continental shelf just off the coast and the splitting of the South Equatorial Current which gives a contrary current of around 1knot. “Confused seas” are often reported in this area. We’ve been sailing around 100miles offshore to avoid these seas and potential freak waves!

2. The Agulhas Current
The South flowing Agulhas Current contains waters from the Mozambique Current and waters from the southern branch of the Equatorial Current. This current flows South and then strongly South West before passing the Cape of Good Hope. It can be up to 6knots in strength, which if the wind is favorable means we could potentially do an extra 144 nm per day sitting in the current. The problem with this current is that on this stretch of coast you regularly get fronts (every 2-3 days) bringing SW gales and creating extremely dangerous seas in a wind against tide situation!! Waves of 70ft plus in height have been recorded here!

3. Frontal Systems (from East moving Antarctic Lows)
The entire area between Madagascar and the Cape of Good Hope is dominated by the frontal systems, which are created by Antarctic lows moving eastwards. A sudden SW gale can create extremely dangerous conditions when it hits the Agulhas current. Boats have been “knocked down, pooped and even lost on this stretch”

With this in mind we paid serious attention to the long range weather forecast in La Reunion. A good few of the Oysters in our fleet left a day or two before us however looking at the prediction of weather due by the time we’d reach the east of South Africa we felt it better to leave on Saturday 16th. We really don’t want to be off the coast of Africa with a SW gale in force and the Agulhas current running at 6knots south!! Ideally we’d like to sail directly to Cape Town however this is unlikely due to the regularity of the fronts and looking at the forecast from here we’ll be pulling into Durban and waiting for a weather window to sail further south. The other option is to stay outside the Agulhas current all the way down, however there is a high chance of being caught by a deep low coming up from the Southern Ocean going this way, so we’ve opted for the coastal route.

According to Jimmy Cornells book on World Cruising Routes the local method of forecasting a SW buster is (as one might expect) to watch the barometer. When it starts falling the winds will be NE. Once the barometer stops falling the wind becomes light and then ceases altogether. The moment it starts rising, you have between 30 to 60mins before the arrival of a SW gale, which will be the warning for us to leave the 100 fathom line quickly, and head for the coast, as this is where the Agulhas current can become hazardous. Obviously before all this we’ll be keeping our usual eye out for the changes in cloud with Cirrus coming in from the west followed by banks of cumulus before the approach of the cold front where the wind will back slowly from E to NW freshening all the time and the followed by the SW gale. Remember we’re in the Southern hemisphere so everything is the opposite way around to the North!

So here we go heading towards one of the Worlds most dangerous stretches of ocean where monster waves lurk and potential of ‘wind over tide’ conditions are of epic proportions. We’ll let ye know how we go but for now looks like we’ll get through ok. Fingers crossed! 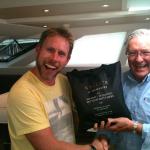 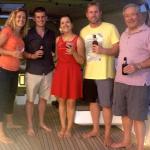 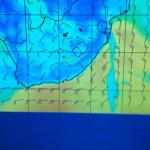 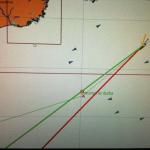 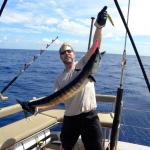 another wahoo for paul current score is 2 1 to lush 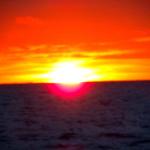 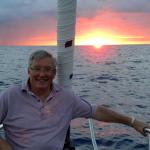 audreys dad joins us for trip to cape town