Madness = Ibiza in August!!!!! | Sailing West Around The World 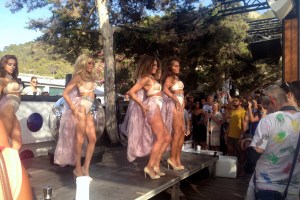 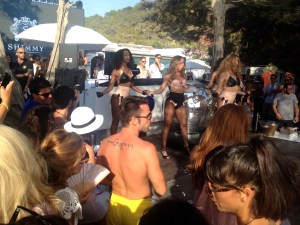 Everywhere in the Med is crazy busy for the month of August and if you want to go cruising anywhere that month I would recommend the west of Ireland!! However, if ‘crazy’ ‘busy’ and ‘partying’ is your thing than there is no where I could recommend more than Ibiza.

There are another couple of good reasons to cruise Ibiza….. the obvious one being the heat… man it is hot hot hot there in August and the water is easily a few degrees warmer than the south of France. It is actually a stunning island to cruise, with scenery certainly prettier than it’s neighbouring island of Majorca and more options for anchoring etc provided you get the weather right!! We were unfortunate on our second week there with nasty swell in some of the anchorages making it unbearable to stay overnight. We had two of our worst nights at anchor over the whole world trip there and had to move in the middle of the night returning to our beloved anchorage in the bay of Cala Jondal on the south coast next to the infamous Blue Marlin beach club.

Now, beach clubs in Ibiza are at a whole other level to any other clubs and bars we’ve partied at to date.  Ibiza is the celebrity party capital of the world and the Blue Marlin is right up there with other island VIP hotspots for celebs and glitterati to soak up the Ibizian sun, sip cocktails and indulge their VIP aspirations. Apparently the Blue Marlin has been the largest seller of Champagne and one of the main sellers of premium brands in Ibiza. The wealth dripping from the place is staggering. Everyone sports the best of beachwear with bodies to match. It’s just such a cool place with superyachts moored outside with superyacht crew ferrying various guests to and fro.

We could also have left the yacht in a marina when the swell kicked up however that would have cost €1,000 per night, definitely the most expensive berth in Europe!! Monaco is a whole lot cheaper than that working out at €250 per night for a 90 foot yacht, still a pricey night in comparison to dropping the hook for free!

Most yachts pop out to the small island ofFormentera, 4 miles south of Ibiza, on day trips and boy it is some sight when you see around a thousand yachts in the main anchorage.Definitely the busiest anchorage we’ve ever been to. There is even an ‘anchoring service’ whereby a member of staff drives a rib about and points where to park the yacht, pretty much like a massive car park except you really wouldn’t want to drift anchor here with little or no room

to swing you always need someone on the boat keeping watch. We were boarded by the spanish customs there, wow they keep a close eye on all the traffic and will board most boats at some stage during your stay. They went through all the boats paperwork with Paul before they were satisfied.   Out of everywhere in the world the spanish authorities have been the most inquisitive and suspicious, always looking to catch you out. Fortunately we have a super record of everything onboard and all the necessary paperwork to hand for these surprise visits. At the end of the day if they are unhappy with anything in our paperwork they have the authority to impound the vessel!

So, would I recommend Ibiza to any of you who wish to cruise there? Yes, I would. With it’s rustic beauty and pretty little coves along with some of the clearest warmest water in the Med it surprised me as an island that has a lot more to offer than just pumping nightclubs and beaches. Be sure to keep an eye on the forecast and swell for anchoring and maybe don’t go in the month of August!!! 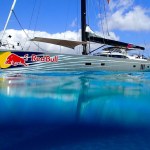 Pauls best pic of LUSH in an anchorage in Formentera. Such unbelievably clear water 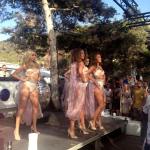 Dancers at the beach club! 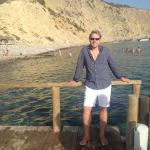 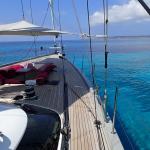 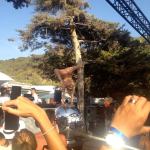 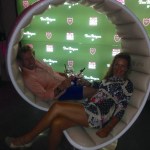 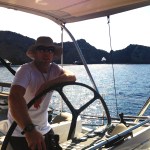 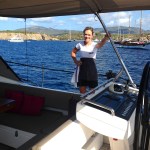 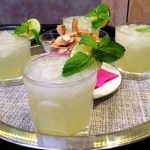 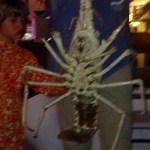 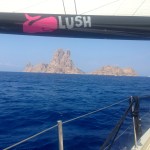 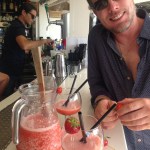 Cocktails in the Blue Marlin 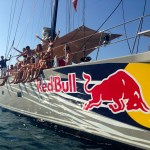