After 10 days at sea we’ve arrived safe and sound in Mauritius with LUSH and all her gear still in tact….  well all her sailing gear at least.  As for the fishing kit… now that’s another story!!!!

8.30am on Monday 28th Oct Paul and I woke on hearing the headsail furl and our engine turn on.  Alan was on watch.  This could only mean one thing… we’ve hooked something!  We quickly joined him on deck to help slow the boat down.  The fishing line was flying out of the rod at a serious rate of knots, Alan shouts ‘this is a big one, slow LUSH right down!’  There may be a word or two missing from that last quote!  Paul steered her up into the wind and Al started to pull on the reel, the fish leapt from the water about 50metres behind LUSH….. it was a SERIOUSLY MASSIVE MARLIN!!!!!

Normally when marlin jump they get a load of slack in the line to then pull against and break.  To date we’ve lost all the Marlins we’ve hooked from this stunt so there was no way the lads were gonna let it happen again.  Al reeled in the slack quickly, keeping the tension on.   Pretty much all the line was still out so we knew we had a bit to go to get this in.  With a fierce amount of pull on the line Al had to work hard, he was sure “this is the one for us, we have him, just have to take our time and play the line”.  “Play the line”??!!!……. one hour goes by…. then the next… then the third and Al is still “playing the line!!!!”.  Lucy is on deck too and the two of us are starting to wonder will this ever end?  The more time we spend with this Marlin the longer it will take us to arrive in Mauritius and the more likely we’ll experience rougher weather, which was forecast.

Meantime, Als hands are glued to the rod and Paul is steering LUSH keeping our fish to leeward and under tension.  Al shouts out that the fish is coming close and soon to surface by the back of LUSH.  The three of us gather round our fisherman and peer over the stern.  Oh boy what a sight we beheld…….. it was a monster, the biggest fish I’ve ever seen in the flesh (besides the humpback whales).  With all the diving we’ve done on this trip I haven’t seen or come close to anything as big.  ‘Twas a Marlin alright, stunning electric blue, purple and aqua green colours on its underside with a seriously long bill (sword/spike above his mouth).   He must have been 12 foot long, and folks ye can trust me when I say that, I find us girls tend to have a more accurate and honest judgment when it comes to size! Now this length doesn’t include the bill, which was prob another 3 foot on top of that!  And there he was, 4 meters away from LUSH.  Als eyes widened, his grip tightened, this was a battle he intended to win, he wasn’t letting this deep ocean beast out of his hands now.  After 20,000 miles this was the closest we’d come to landing a whopper…. He clutched the rod tightly, no way could any of us come between him and his fish.

Al figured the Marlin had plenty of energy yet and said he’d need a bit longer to tire the creature out.  His birthday was a day away and skipper granted him his wish, even if it was to delay our arrival into Mauritius by a day.  This was looking likely as we had to get in before dark the following day or wait till first light the day after to enter Port Louis under harbour regs.  Another hour with this fish, really meant another 12hours for us at sea on top of the time spent reeling him in!!!  Lucy and I looked at each other rolling our eyes thinking the lads are in deep now and they just won’t give up.  The forth hour goes by, then the fifth and I’m seriously getting frustrated, “come on Al, get the blinking thing in”.  Al just continued to tire the fish, letting the line out and then reeling him back in, recalling fishing lore such as Hemmingway’s Old Man and the Sea when it took Santiago three days to tire his marlin out!!!  I was getting impatient telling Al to get it close and we’ll put a noose in the end of the halyard feeding it down to our marlin around the fishing line.  In fairness it isn’t as easy as that, not with a fish this big and aggressive.  Al was right, we needed to fully tire him out before we could bring him onboard.  What would we do with him once onboard was still a bit of a mystery!

The sixth hour goes by with much the same battle as the previous five.  We had suggested to Al on numerous occasions to take a break and put Paul on the rod but this was a battle Al wanted to fight on his own.  I’m guessing that’s some type of masculine, animal type testosterone thing that I will never understand.

And finally the seventh hour…..

There was no sign of Als powerful pelagic giant caving in and by now it had pulled the mighty LUSH 20miles off course in a seemingly inexhaustible display of strength.  I still don’t know how the rod is still in one piece, it practically bent all the way back on itself from the pressure.

After the first hour Lucy and I had started to ponder on what we could have done with an hour of our time had we been back home.  I would have made it over to my sisters (Eleanor) house from Dunlaoghaire, playing with the kids catching up on all the gos and back to my place within the hour, with two hours I’d have been to Galway to my Melanie’s pad (younger sister), over three hours would have you on the final stretch of the Dublin to Westport road and the in the heart of Connaught’s countryside.  Four hours I’d be having a cuppa with Clodagh (third sister), Ronan and the kids and five hours I’d surly be home in Newport from Dublin in around the kitchen table with the folks, tucking into the bacon and cabbage (oh I do miss that, Mum!) … Six hours and we’d be cosy out around Dads fire drink or two in hand…. But seven blinking hours… seven full hours…….. God knows…… do you ever think about what you could do with seven hours?  Certainly Lucy had gone from London to Penzance with her time but she too was struggling with the seventh hour…

It was time to get tough… Al was reluctant to put the full break on the line and just wanted to keep tiring his opponent out…. he would have stayed up with him all night I’m sure of it…. Alas, he put the break on and our Marlin pulled back only a meter from the stern, snapping the line and swimming free… GAME OVER

I’m not sure about Indian Ocean Marlin but certainly the Atlantic Blue Marlin is a threatened species and must be released if caught within 200miles of the US.  Sports fishermen catch them, haul them onto their boat, take the pic etc and release them.  The survival rate of released fish is low because of damage during capture.  So really it’s a good job we never got the beast onboard.

What Al felt at that moment we can probably all only imagine… there’s not many of us who would take on such a fight let alone stay at it for that length.  One thing is for sure HE HAS A STORY, which really is what we all have at the end of the day, just this is one that will endure.

Once Al finished his battle and record attempt we then had Skipper on a mission to compete his record and get this boat into Mauritius within 10days.  We threw the third reef into the sail and put LUSH back on course.  As darkness fell the wind picked up to about 35-38knots, with seas building we knew we had a long night ahead.  LUSH maxed at 18.6knots that night, we blasted through this Indian Ocean and arrived on Als birthday (29th) at 3pm.  Our final fish score was 8 to Fish and 6 to LUSH, they got us and finished it off in style.  We really have to hand it to them!  And as for Als Marlin, well my guess is he’s back living it up in his Ocean and will no doubt stay clear of shiny pink squid for a while at least! 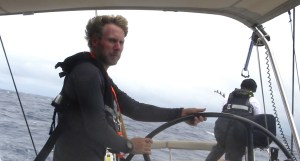 2nd hour, serious focus, skipper steers boat so helping Al keep tension in his line and stopping fish swim under the boat and snapping the line!

3rd hour, the Marlin surfaces by the stern 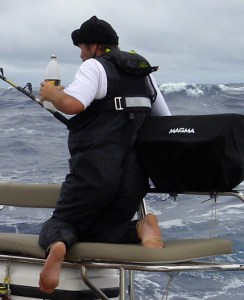 4th hour, Al stops for the first time to rehydrate 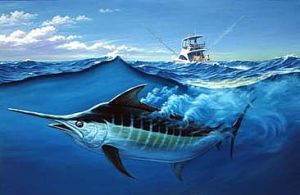 Fancy a trip to the Antarctic? This Marlin was not giving up! Salty sea dogs arrive in Mauritus after the final grueling 24 hours at sea! Certainly three of us were glad to be on terra firma!