OMG AL caught a SHARK!!!!!! | Sailing West Around The World

.So we’re all down below bar Wallis who was on deck doing some yoga as dusk fell last night… Next thigh Wallis calls down to Al saying there’s something pulling on his fishing line. Now we often drop our line out in an anchorage but so far we haven’t had a bite unless the boat is in transit so Al was sure it was a false alarm and told Wallis to leave it… next thing the rod jumped again and moved 180 degrees to which Wallis shouted with certainty ‘Al, there’s definitely something on that line’…. Alan jumped up and started to reel it in… ‘it’s a shark, it’s a shark!!!…..’ It didn’t take long to get all crew on deck with cameras to view the catch… OMG.. it really was a shark.. but no sooner had we taken the pics and were about to figure out how to land it, keeping all limbs intact, then the line broke… and we lost our shark!!…… Unbelievable… The cook in me was nervous about tacking it and cooking it but the dentist in me couldn’t wait to get my hands on those teeth!!! Sure enough, as with most patients he managed to wriggle his way out of their before we could get started! ..oh well there’ll be another one at some stage I’m sure…
Audrey 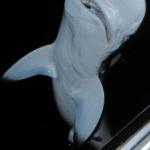 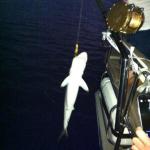 al with his shark