Press: End of Rally Party! | Sailing West Around The World 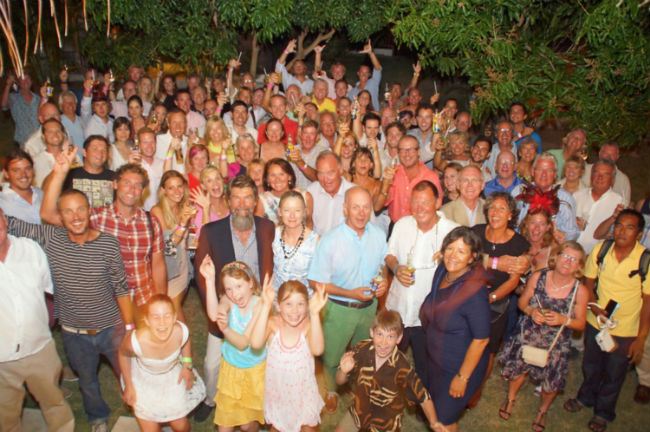 Saturday 5 April 2014 marked the official end of the inaugural Oyster World Rally, organised to celebrate the 40th birthday of Oyster Yachts. Owners, sailors and friends of the 30,000 mile odyssey gathered in Nelson’s Dockyard for a day and a night never to be forgotten.

The Marching Band of the Antigua and Barbuda Police Service fired up proceeding with an early morning revelry in Nelson’s Dockyard, Antigua, followed by the Oyster World Rally Awards Ceremony at the Admirals Inn. The Bucks Fizz was flowing and delicious brunch canapés were eagerly snapped up before Oyster CEO, David Tydeman welcomed the Oyster World Rally sailors to the awards ceremony.

“You have been an incredible inspiration to an enormous number of people around the world.” commented David Tydeman. “Your fabulous achievement has been followed by hundreds of thousands on the internet and Oyster has received expressions of interest from 200 families wanting to take part in the next event. Before the first Oyster World Rally started, 43 Oyster yachts had received their Oyster Circumnavigation Award and it gives me great pleasure to give out 23 more today and I am lost for words to describe how amazing that is.” 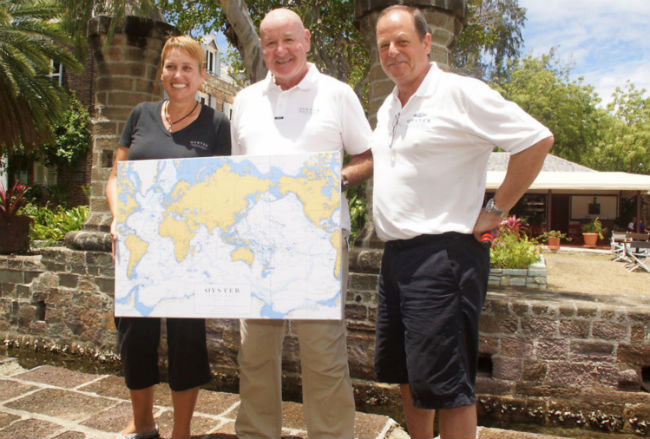 Ian Davis owner of Oyster 56, Yantina operated a radio-net during the Oyster World Rally and was welcomed by David Tydeman to the stage to act as Master of Ceremonies. Much to the amusement of the guests, Ian used radio etiquette to call each yacht crew to the stage, the applause and laughter was long, loud and very genuine, as each yacht received their silver salver commemorating their circumnavigation.

The biggest cheer of the Awards Ceremony was the last, Eddie Scougall and Debbie Johnson have been the rock on which the Oyster World Rally was built. Two years of meticulous preparation was followed by 24-hour support throughout the 16-month voyage, assisting in all manner of logistical and technical solutions.

“That was a blast!” smiled Eddie, addressing the sailors. “ You should be very proud of what you have done, 99% of yachtsmen dream of sailing around the world and you have actually done it. This rally has seen higher highs and a few lows and you have taken everything in your stride and overcome so many adversities. Everybody has looked out for each other, providing all sorts of help, advice, moral support and occasionally a shoulder to cry on. If there was a spirit of the rally award, it would have to go to everyone, you have proved this by the way you have all bonded and every crew has stuck it out, right from the start to the finish and that is something fairly unique in this type of event. Debbie and I would like to thank everyone for their kindness, consideration and putting up with us, even when things weren’t going quite as they should. Words cannot express how proud…”

It was all too much for both Debbie and Eddie, who broke down in tears, spilling out the emotions of 30,000 miles and nearly four years work, it all came welling-up to the surface, as they left the stage to a standing ovation and a warm embrace from the Oyster family.

A private party was held at Casa Lidia, one of Antigua’s most exclusive villas with un-paralleled views of Nelson’s Dockyard. After a champagne reception, guests were treated to an evening of unusual entertainment of their own making. Each yacht in the Oyster World Rally performed an amusing sketch depicting their take on the experience. Raucous laughter and tumultuous applause accompanied each performance but Bob Morgan’s video rendition of Billy Joel ‘We didn’t start the fire!’ was so good an encore was demanded. The sketch included a six minute video depicting the Oyster World Rally, a cameo of moments from the event; whales breaching, dolphins playing, scuba diving, tribal dancing, trek walking and ocean sailing.

The party went on long into the night, with sailors reminiscing with each other about the incredible experience they had shared together, the Oyster World Rally had reached its conclusion but the memories and friendships made between a special group of people would last forever.