Storm’s A Brewin! | Sailing West Around The World

Day 5 at sea and we’re monitoring a depression developing to the Northeast of Mauritius. We delayed leaving the Coco islands by a day to avoid this same depression and we considered delaying for another day however we decided against that and opted to capitalize on some decent wind outside of the low giving us good passage time to Mauritius. That decision certainly paid off and LUSH has averaged over 10knots since we left the Cocos. We normally calculate our passage time based on an average of 8.5knots, so as you can imagine we’re all delighted onboard to be clocking up the miles at this rate. To recap we’ve logged 974 miles after 4 days at sea and 262 miles in one day has been our best day so far.

One thing’s for sure, we’re grateful to be sailing the oceans in this day and age, where we can get decent weather information at sea. It’s only really in the last 10 years or so that yachts have used sat phone and Internet for weather forecasts. Prior to that it was mainly all on HF radio. So once a day we connect to the Internet through our Sat phone and download the GFS model gribfiles with Zygrib in the States. We can get hold of weather faxes too if we want and also Eddie Scougal (from Oyster) has been sending a daily email to the Oyster fleet with an update from UK Met Office.

There is a chance that this depression may develop into a tropical cyclone which when mature can generate winds in excess of 63knots (Force 12). Tropical Cyclones are found around the world in both hemispheres developing within a band between 5 and 20 degrees latitude from the equator and mainly during the summer months. The tropical cyclone season in the Southern Hemisphere is from November to April. Within the eye (centre) of the cyclone winds are light and in the wall around can blow up to 180knots and decrease towards the outside of this wall. A young cyclone moves at a rate of around 15knots and normally in a westerly direction angled slightly away from the equator. It slowly picks up speed until one of two things occur: either it reaches land, or it

recurves (South and then East!).

And now the Good News….

· We are all tracking this with regular forecasts

· Our gribfiles show the max wind speed at 50knots

· Fortunately the barometre has been steady, as normal, with a regular daily rise and fall of a couple of millibars peaking at about 10am and 10pm and reaching it’s minimum at about 4pm and 4am. Any pressure falling outside this normal daily range will be an early warning for us of approaching weather.

And the Best News of all…..

· I have a load of army ration packs to feed the crew so I won’t be venturing into the galley if the proverbial hits the fan!

And finally some Fishing News….

Well our fishermen are back in action and are currently holding a score of 6 – 3 to LUSH (no flying fish included this time)!!! Rejoice!!! We’re not cursed after all…… well actually there is a footnote coming up……

We had to throw 4 of the fish (Wahoo/Spanish Mackreal) back in the ocean as they were riddled with parasites and worms!!!

One Life…. Currently sailing and fishing through it!

Audrey and the mighty crew and skipper aboard the goodship LUSH 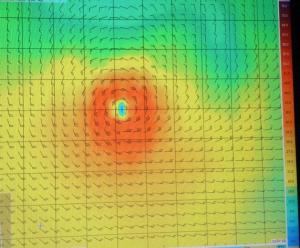 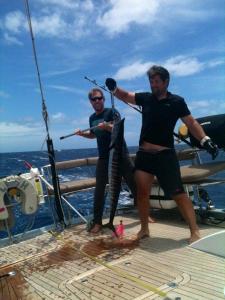 fish at last check out this massive wahoo 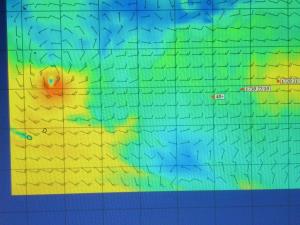