Tonga, the place where time begins! | Sailing West Around The World

Tonga, the place where time begins!

Yet again Lush enjoyed a mighty passage.  With the breeze up in the late 20s we pulled out of Bora Bora and with a couple of reefs in our sails headed west for the Kingdom of Tonga.  Most of the Oyster fleet had set off ahead of us so we thoroughly enjoyed sailing up through the fleet catching everyone, with plenty of banter, on the VHF, as we sailed on by.  There’s really no denying the advantages of being the bigger boat!  On route we sailed through the International Date Line and lost the 27th May from our diary.  Unfortunately, we had to bypass the Cook Islands as there was no decent solid anchorage there for Lush and with our barometer falling and a forecast of gale force winds we were keen to tuck up in the lee of Tonga ASAP.

The Kingdom of Tonga

We were the first in the world to experience  dawn, on the 28th May, as we arrived into Vava’u, Tonga.  Now, Tonga genuinely took us by surprise.  It sure was a remarkable place and certainly one we’ll return to some day.  The kingdom of Tonga is the oldest and last remaining Polynesian monarchy.  It’s the only Pacific nation never brought under foreign rule.  While Europeans could barely sail out of their backyards until the 1500s, these islands were populated from the west around 3000 years ago.  For sailors the Vavva’u archipelago is the place to go, with 60 plus islands to explore in stunning turquoise waters over 18 nautical miles east-west and 16nm north-south.

The people there were just soooo welcoming and humbling.  They’re very traditional, wearing these distinctive mats, called ta’ovala, wrapped around their waists.  The ta’ovala is worn as a sign of respect to God, King and Country.

Tonga is an important breeding ground for humpback whales and most tourists get an opportunity to swim with them here.  We were gutted not to have seen them during our stay, it was just too early in the season, another reason to return some day, that’s for sure.  There’s a moorings/sunsail charter base here so it will definitely be an option for us in future and we would highly recommend it to you folk back home.  Out of all the places we’ve been on this adventure so far it is the one place that has stuck most to their traditions and past.  There are no fancy resorts there like French Polynesia or Fiji and no major outside influence.  There’s a massive sense of community, religion plays a big part in it with all the churches coming to life on a Sunday as every single person sings loud and proud and can be heard for miles around.  No one is allowed to work on a Sunday or partake in any sport at all; it is strictly a day of rest.  On some of the outer islands there’s still no electricity.  A couple of houses are fortunate enough to have a generator and also a TV which is really only used to watch the rugby and boy when you meet Tongans you can see why this is their national sport!!

And yes, we did drink some of the all-important Kava on one of the Oyster party nights.  Kava is drunk from coconut cups at Kava parties or as a ritual.  It is a species of pepper tree, which is prepared by cutting the root into small pieces that are dried in the sun and then pounded into a fine powder, which is then mixed with water and strained through a fine mesh.  Honestly it looks like dirty washing-up water and tastes like soil….  It makes your mouth go pretty numb so will come in handy should I ever run out of my dental anesthetic!

On the small island of Nuapapu we visited the local school where the proactive teacher welcomes yachties to come along and teach the kids something of where we’re from and the kids in turn practice their English and sing some songs for us.  I brought a load of toothbrushes and toothpaste and explained the advantages of good oral hygiene and cutting out on sweets and chocolate in their diet…… they all looked a bit confused on this note and the teacher reminded me that as there’s no shops on the island the kids just eat what grows on the tress, in the ground or from the sea.  Needless to say I felt a bit silly at that point.  It’s still hard to imagine people do genuinely live like that on the smaller outer islands.  On Sunday, after mass, one of the local women invited us back to her house and gave us some food from their underground earth oven or ‘umu’.  That was unreal to see them uncover this oven in the ground full of beautiful cooked smokey food.  In French Polynesia they explained that their ancestors used underground ovens but in Tonga they’re still using them.  We spoke to a few New Zealanders who travel there regularly and they explained that the place hasn’t changed in the 20 years they’d been visiting the islands and apparently it wont change in the next 20 years!

Being Irish you really can’t go anywhere without bumping into someone from home or a relation of some sort.  However, since we came through the canal (Panama) I’ve only pumped into one Irish person.  Now, Tonga is as far away from Ireland as could be and low and behold I bumped into not one cousin but two along with another fella from Westport.  You certainly don’t expect to meet someone with a Mayo Sailing Club t-shirt on, that’s for sure.  Basically, there’s a gang of lads and gals sailing through the Pacific on a Volvo 70’ and they happened to pull into Neiafu, the main port in the Vava’u group, when we were there.  Great to see Mayo sailors sailing west across the Atlantic and through the Pacific…  it’s just something about that sunset in Clew Bay that draws us west to explore more I’m sure!

We’ve got some great videos of our experience in Tonga, which will prob, give ye more of a flavor of these people and their attitude to life.

One Life… they’re certainly living it in Tonga 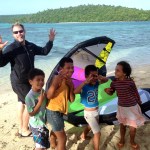 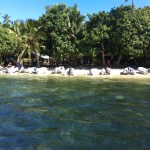 Tenders on the beach for another Oyster Party! Cousins Meet Up in Tonga!