The Maiden Voyage! | Sailing West Around The World 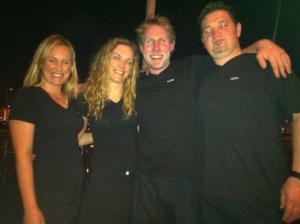 Wow what a great passage this has been, after months and months of preparation we finally slipped our lines and left Southampton on Wed 14th. We only got the keys to Lush 6 days earlier so while we’d been working away in Southampton since mid August we couldn’t load any of our things onboard till the boat had finally been handed over from Oyster (the boat builders). Between the four of us we had a rough plan as to where we’d stow our bits and pieces…
These aren’t just any ‘bits and pieces’…. this was everything we thought we’d need for a round the World trip, bearing in mind that most of the places we’ll be going to are small islands with plenty of beaches and palm trees but very little in the line of shopping!

Our spares list had been growing by the day as Alan, our engineer, put together the 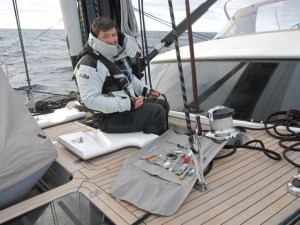 ‘what-if’ list!! ‘”it’s all about anticipation,” Paul would say…. in ocean sailing we don’t want to be in a position where we’re ‘reacting’ to things going wrong.

Alan (right) whipping running rigging on the hoof for reefing!

We need to anticipate it before we go and have the spare part there when/if something or other eventually gives this way we can keep to our schedule and not get delayed waiting for a part to arrive in some far fetched corner of the World. We need to keep this boat on time so we don’t miss out on a weather window. Trade winds all the way baby!!!

Wallis had just as big a list as Alan…. 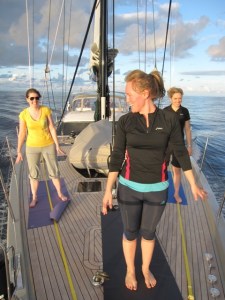 She’s looking after all the interior of Lush and on a boat this size that’s a lot….. there’s all the bed wear and cleaning equip along with the soft furnishings that gets stowed away while we’re on passage… to add to this

Wallis is a yoga instructor and massage therapist and has brought enough yoga kit for 12 peeps and a massage table to look after all the hard working sailors backs!!

As for Paul and I … well we couldn’t go to sea for 18 months without bringing our Kites and boards etc.. for some kite surfing in pretty cool spots! There’s various other bits of waterspout toys packed away onboard. Paul got some massive lines for the Panama canal to tie Lush alongside and in excess of a few hundred charts along with a load pilot books and manuals for every piece of electronic kit on the boat.

And then there was all the galley equip and food provisions…… I had 12 boxes of galley equip which I fitted between 4 cupboards in the galley!! It’s unreal how the boat just swallowed up all of our stuff. We reckon we’ve put 4 tones of kit on the boat between everything and the majority of this stuff is stowed under the floorboards, in the bilges and under any side lining in the boat!! I spent (along with my Mums help!) about 12 hours food shopping over 4 days so that we’d have all the ingredients necessary to tackle any fancy recipes when we get to the Caribbean and beyond! For the two main passages to the Caribbean (the 8 day Las Palmas one and the 14 day Atlantic one) I cooked up most of the dinners in advance, vac-packed and frozen them. We just don’t have the storage space to make dinners up from scratch and it generates a load of rubbish, which we then have to stow on the boat till we reach land, so cooking in advance is the way to go and in fairness ‘tis a lot easier to reheat some grub then start chopping and preparing food in big swell at a 45degree angle! Obviously I did get a load of fresh fruit and salad to keep us reasonably healthy afloat!! 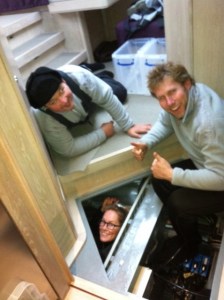 For the 6 days of packing Lush we didn’t stop once…. It was like a full on game of tetras (you know the game you’d have played on your first phone/computer). You’d fit something into a space and then turn it into a million different positions so that the space could be used to its maximum.

Wallis’s mum Sarah, Alan’s two daughters, Amber and Cori along with his wife Kizzy worked flat out with us for 5 days solid. My parents arrived at the weekend and they were put to work straight away. Collect Goode joined us on the Monday night and definitely noticed the difference between this and the Sailing West Fastnet campaign last year onboard our reflex 38’, which didn’t even have a cooker!! Collect had fractured her foot the day before the Fastnet race itself after having done all the training etc… She was gutted about it at the time but joining us onboard Lush for the maiden voyage to the Canaries has more than made up for it!

After our months of sorting, organizing and packing ‘twas just mighty to finally set sail on the 14th of Nov! The trip down was ideal with calm seas and a light easterly breeze initially and then building to 30knots from the North, lovely! The last few days were calm again with a bit of a swell and we had managed to peel our layers daily finally finishing in Las Palmas with shorts and t-shirts, a bit of a change from all the thermals, mid layers and heavy weather oillies in Biscay! We worked a 3hour watch system with 6 hours off and then two ‘happy hour’ sessions a day where all crew would be on deck together for lunch, dinner and our daily dance class with Wallis to keep us all active!!! Now that’s some sight, eight of us dancing around the aft deck! Classic!

We arrived in Las Palmas 8 days to the hour later on Thursday 22nd and have been pretty flat out since gearing up for the Atlantic crossing which we expect to take us around 14days or so. Our new crew have joined us and we hope to set sail tomorrow, will try keep you posted on route!! Must dash for now… lots to do…… happy days  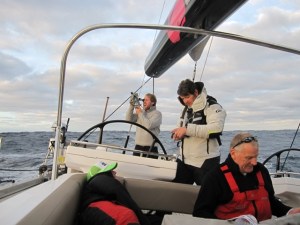 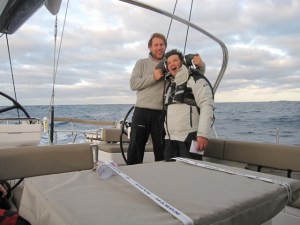 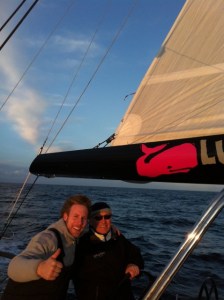 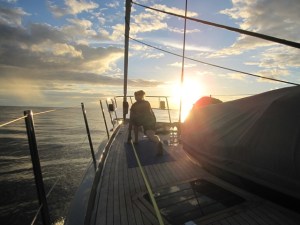 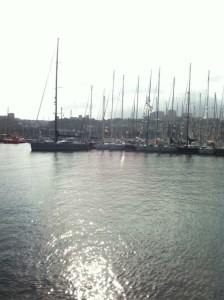 LUSH Parked in Las Palmas amongst the ARC yachts!

You can follow our progress on our tracker……. http://yb.tl/lush