We arrived safe and sound in St Helena on Friday evening to be greeted by some of the most friendly and fun people we have ever met!

We were greeted by 3 “Saints” which is what the local people are called! St Helena has 5000 “Saints” living on it and its only 10 miles long by 5 miles wide!!!

Yesterday afternoon we went off with Colin Corker in his 1929 Chevy and he drove us over to the house that Napoleon lived in when he was exciled here. He was on the isand for 6 years up until his death in 1821 when he was buried here for 19 years until France removed his remains to Paris. Ivy who was our host in the house was so knowledgable and gave us so much history! It was pretty awesome to be in the room standing next to his bed that he died in!

Last night we had the team from SAMS radio onboard and Sharon interviewed and have asked Audrey and I to be guests on the’ Juicy Mango’ show tomorrow evening with Richard!!! Darrin took a load of pictures for the local paper too!!
Al and his wife, Kizzy, were interviewed on the other local radio station at the same time!
Fame at last for team LUSH!! Well we all have to start somewhere!!!

This morning, Anthony took us for a dive at “Long Ledge” where we encoutered two 3 metre wide dervil rays (Slightly Smaller than the Manta Ray) and they put on the most amazing show for us circling us and swimming right up to us and playing for ages…it was an awesome dive!!! One of the best I have ever done!

Back onboard for a cup of tea and then we heard Audrey shouting from the back of LUSH saying quick guys…..we ran to the transom and there was a couple of 35′ Whale Sharks right next to us on the surface…..I just thought….’ONE LIFE’…..and whipped off the shorts jumping into the water in my boxers with mask, snorkel and camera in tow! 10 mins later Audrey and Lucy joined me to meet our new friends!

What followed was an amazing experience where the Whale sharks swam with and around us for about 30mins…in fact everywhere we swam he followed!! The girls did let a few yelps out of them as he was fully gunning for them at one point!! Totally safe though, these guys only eat plankton!! Its hard to get a across the scale of them in words…so look at the picture I took from behind one of the whale sharks and you will see Audrey & Lucy’s legs and asses tiny next to the shark!!! I can honestly say it was the best swim of my life. It’s just so rare to get an opportunity to swim with such awesome sealife!

So 2 days in the most remote island in the world as it has no airport and my God its been amazing so far!!! 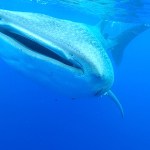 This guy just kept swimming for me!! 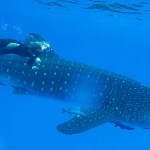 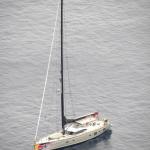 lush at anchor in jamestown 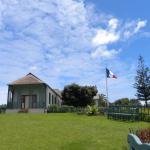 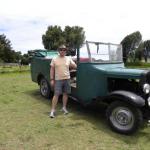 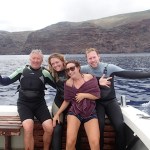 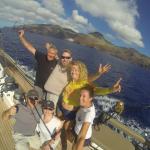 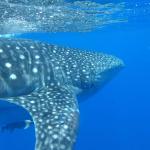 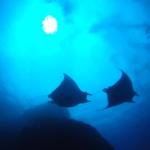 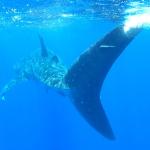 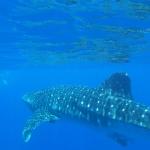 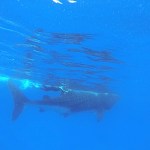 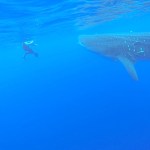