December | 2014 | Sailing West Around The World 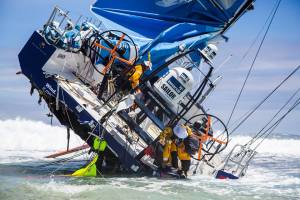 “I made a big mistake” were the humble sobering words from navigator Wouter Verbraak of abandoned Volvo 65, Team Vestas, as he took to his Facebook page this morning adding “I am totally devastated and still in shock as the gravity of our grounding is slowly sinking in”Firstly, I want to congratulate the skipper, Chris Nicolson, for his leadership in extremely difficult and dangerous circumstances during the grounding and subsequent evacuation of his yacht on a reef, at night, in the middle of the Indian Ocean. “I take full responsibility” were the skippers words and it is incredible that all 9 members of team Vestas are safe and physically unharmed after such a shocking event.

From sailing through the Pacific and Indian Ocean last year during our circumnavigation on LUSH I understand how this could happen. However, I have a few observations on this incident which I feel we all can learn from. 1. Whilst the yacht was on passage it appears that there was no cross referencing on a paper chart. Keeping a running plot on a paper chart should have shown the navigator that the reef was a danger.2. Wouter Verbraak, the navigator, explained “What I saw was depths of 42m & 80m indicated” on the electronic chart. These oceans are thousands of meters deep so if anything shows up different to this i.e. 42m/80m it is prudent to investigate further. In aviation this would be similar to flying an aircraft at 40,000 feet and the pilot crossing a mountain range where the clearance is a few hundred feet. Would a pilot go that close to the mountain in the first place? 3. Fatigue would have played a substantial part in this accident too and this comes down watch systems and having another couple of accountable eyes on the navigation too, continually cross checking, especially when racing under such pressure and with such little sleep.4. From seeing the video footage before the grounding I am unclear if the crew were wearing life jackets and clipped onto the yacht with safety lanyards? This would be a standard procedure whilst sailing at night. (I appreciate that they carry survival suits with integral flotation devices but I’m unsure from the footage whether they were wearing them or not)

Media man Brian Carlin, once again shows us his untiring dedication to his role onboard.  His jaw-dropping footage and documentation is amazing!  Thankfully everyone is safe which truly is phenomenal given such extreme circumstances.

It is vitally important that as sailors and an industry we ALL LEARN FROM THIS INCIDENT!

Having skippered a yacht around the world over the past 2 years and negotiated numerous coral reefs I can say with some authority that many reefs did not match the charts.  The bottom line is when navigating around coral you have to be razor sharp and you must not allow yourself to fall into the screen junkie trap! It is so easy to become hypnotised by the screen! Get your head out of the boat!

Over my years teaching and examining skippers in yachting and navigation I have noticed that as technology has become more common place onboard we all tend to over-rely on it.  Many people just blindly trust the screen without question and base all their decisions from that alone.

What this means is that it is easy for us to fall into the trap of over-reliance.  Check out this awesome little video of us in Tonga to see the differences between the Electronic Chart and what is actually there!

This was also the case when navigating in Fiji and was particularly highlighted as we approached The Lau Group of islands.

After cross-referencing between our paper chart, pilot book and electronics it all seemed very straight forward to enter the lagoon by sailing down an approach transit through the cut in the reef and then head around the north of the island to the anchorage.

However, it became apparent when we arrived off the lagoon that the position of the yacht on the chart plotter was inaccurate by around 0.5 NM (1 km) relative to the land.  Bear in mind, the cut in the reef is just 50 meters wide and our yacht is 27 meters long so there no margin for error!

I learned a long time ago that your best navigation tools are YOUR EYES and it is critical that you use them!

As we sailed around the outside of the island at a safe distance, I indentified what looked like the transit, NOTE what I wrote there! “What LOOKED LIKE!”  I didn’t confirm this was the transit until I had taken a bearing and matched this with the paper chart.

It was very clear that there was an error as we had LUSH on the transit yet our chart plotter showed us south of the transit. This was confirmed by a simple overlay with the radar screen onto the chart plotter, which acted as a second check for me and shows the error very clearly. Here you can see the RADAR picture in pink – which should be over the yellow of the land! The difference is the error!

It was totally deceiving and when you look at the picture you will see it looked like we were going to run onto the reef, which was not the case.

At times like these, as a skipper, you must be razor sharp with your management of the boat and delegate tasks to the crew so you don’t get overloaded or confused.

I have seen skippers get confused on numerous occasions, hypnotised by the screen, and they end up completely disorientated whilst their yacht carries on moving!

The trick to break this hypnotic trance is to get your head “out of the boat” and forget the screen.  Start looking at the land and appreciate the big picture!

I immediately briefed the crew with what jobs I wanted them to undertake.  I instructed the helmsman not to worry about anything else apart from sailing the course and keep the yacht with just enough speed for steerage.

SLOWING DOWN will buy you time to make quality decisions and also allow you to proceed with caution.

I posted look-outs on the bow, with radios, so they could feed me information about what they could see.  ‘NB’ Your lookouts need to be wearing polarised sunglasses!  This dramatically reduces the reflection of the sun on the water allowing you to see most obstructions.  There were times when the only thing that would get us through a reef were our sunglasses! 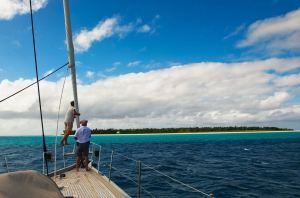 Get your team on the bow and port and starboard side to feed you information.

With the above setup we took our time and safely entered one of the most beautiful locations on the whole trip without incident.

We contacted the yachts in the vicinity on VHF entering behind us, informing them about the error.

However, a nearby yacht hadn’t received the warning message and unfortunately for them they were about to learn the lesson of over reliance the HARD WAY!

They totally relied on their screen, lining their yacht up on the transit on their plotter and promptly followed the screen until they found the reef with their keel! Fortunately no damage was done except maybe to the skipper’s pride!

So the moral of the story is that when you are navigating your yacht (especially near coral in far flung places), you must be switched on, slow down and cross reference all your information from your paper charts, pilot books & Electronics!

Below are a couple of pointers of what to remember!

➢ Brief Crew & Delegate Tasks
➢ Time your arrival/departure with the sun behind you (Daylight Only!)
➢ Decent Polarized Sunglasses
➢ Navigate at a Safe Speed
➢ Post Lookouts (Up High if you can!)
➢ Keep your head out of the boat!

Remember, Sail Safely, Enjoy Your Passion & see you next time! If you have any comments or questions please post them below!

One Life… Live It

Want Us to Email You As Soon As We Post?