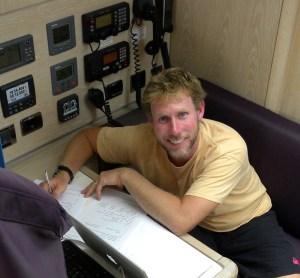 Paul started sailing over 25 years ago and has been working professionally in the sport for the last 19 years.

Paul, from Chester, England started sailing Topper dinghies on the river Dee before moving to North Wales and training in Plas Menai, one of Britain’s best National training bases.  There, he quickly flew through the courses qualifying with an RYA Yachtmaster Offshore at the tender age of 18.  He then progressed into teaching yachting before moving to Southampton and completing a degree in Merchant Shipping in 2002.

While in Southampton Paul continued his racing and worked as a skipper for Formula One Sailing and Clipper Ventures.  Around this time he started a mini transat campaign, designing and building a mini.  He raced in numerous offshore races to France and the Fastnet before moving to Ipswich and working for world famous boat builders Oyster.  He worked in Oyster commissioning and then returned to skippering this time as captain of Oyster 56’ Spellbound sailing around Britain and Ireland along with a couple of trans-atlantics and a Caribbean season, where he met Audrey.

In 2006 Paul moved to Ireland with Audrey and started out running corporate sailing days, on the Oyster 56’, in Dublin Bay.  In 2008 he set up an RYA sail-training centre, Sailing West, in Dublin running both cruising and racing courses.  He had originally intended to set the centre up in the west of Ireland but after running a few pilot courses in Dublin he realised there was a massive demand in the capital city for such an outfit.  Paul continued work with Oyster, and would do the odd bit of relief work, skippering some of the larger yachts to the med at various Oyster Regattas.

The last couple of years Paul’s team of RYA instructors continued running the courses at Sailing West, freeing him up to work more and more off the water.  Seeing Paul’s unique team and leadership skills some of his sailing clients invited him to work motivating their staff in their own businesses.  From years of working in yachting Paul’s skills of leading teams in challenging and tricky conditions reached a whole new audience and Paul  excelled at it.  He enrolled in business and leadership courses from the UK to the States and even Fiji learning from the top speakers in this industry including Tony Robbins, Andy Harrington and Brendan Buchard.

In October 2011 Paul got a call that would change his life.  He was headhunted by Eddie Jordan, of Formula 1 Fame, to captain LUSH, Eddie’s Oyster 885 (the first in build), and to sail her around the world as the flagship boat in the Oyster World Rally.  Paul oversaw the build of LUSH and coordinated the whole world project from the shore before going to sea on the 14th of November 2012.  He, Audrey and his team have now sailed LUSH around the world and Paul & Audrey have moved back to the UK.

Paul, not one to ever hang around has setup up the worlds first online skipper’s leadership program called, “The 7 Master Skills of Highly Successful Skippers” and also has created a membership training site for sailors who want to be the best they can at www.successfulsailor.com

Paul has also been commissioned by some large corporations to design and run bespoke in-house training programs for their teams to help them succeed at the highest level!

If your the owner of a business and want to get more info, drop us a line on info@sailingwest.com