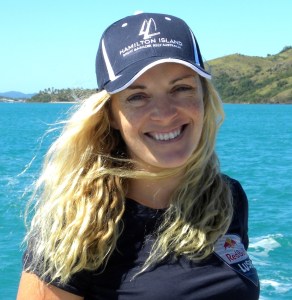 Audrey Adamson (nee Mc Govern) – First Mate & ChefAudrey learnt to sail amongst the islands of Clew Bay under the shadow of Crough Patrick, in the west of Ireland.  She sailed with her parents, Anne and Joe Mc Govern, and sisters in the family yacht over the summer months.  Audrey raced the laser dinghy as a teenager and was the first sailing instructor in her club, Mayo Sailing Club.

She team raced for Cardiff University (Wales), where she studied to become a dentist.  Audrey first started skippering yachts offshore at the age of 19 and qualified as an RYA Yachtmaster Offshore at 23 years of age.  Audrey has represented Ireland at numerous regattas in Europe, racing various dinghies, sports-boats and yachts.

Audrey worked her first year as a dentist in Southampton, living and sailing from the word famous yachting town of Hamble.  She then took  6 months leave to pursue her passion and worked as a professional yacht skipper in the Caribbean, which is where she met Paul.  The largest yacht she skippered at the time was 75’ ketch Whitbread.  Audrey raced the Heineken Cup (St Martaen) on 115’ ketch Sojana followed by a trans-Atlantic crossing on the famous 165’ gaff rigged schooner, Eleanora.

Audrey moved back to Dublin later in 2006 where she continued her dental career working in McMahon Dental, Blackrock.  With two Fastnet races and one Round Ireland Yacht race under her belt she really took to offshore racing.

She also loves inshore racing and along with Paul raced aboard John Bainbridge’s Swan 48’, Zen, winning the Swan World Championships in Sardinia, 2008.

Seeing a massive need for sail training in Ireland Audrey was very involved in Paul’s RYA sailing centre Sailing West and sailed as first  mate for Paul in their offshore training and race campaigns.

Audrey is a member of Mayo sailing Club, the National Yacht Club, Dublin and the Royal Ocean Racing Club, London.

Sailing around the world is a dream come true for Audrey, who has harboured this ambition since her childhood.  To work as a professional sailor for Eddie Jordan on a superyacht as part of the Oyster World Rally was beyond her wildest dreams!