Circumnavigation | Sailing West Around The World 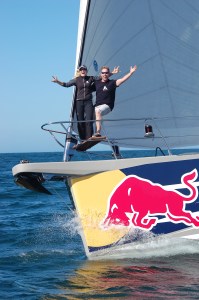 Audrey & Paul on the bow of the mighty LUSH!

Paul and Audrey were headhunted by Eddie in 2011 to supervise  the build of LUSH, recruit a crew and then sail her around the world.

Paul, from Chester, UK, has been a professional yacht captain for over 18 years.  Along with skippering and racing he is also a Yachtmaster instructor and examiner for the Royal Yachting Association (RYA).

Paul and Audrey met in the Caribbean 8 years ago.  Audrey, from Newport in the west of Ireland, was working professionally as a yacht skipper at the time, while taking a 6 month sabatical from her career as a dentist.  They both then moved to Dublin, Ireland and set up an RYA sail and race training centre called Sailing West.  Audrey worked in Mc Mahon Dental, Blackrock, Dublin for the next 6 years while Paul ran the sailing centre in Dun Laoghaire.

Paul is also a talented speaker & corporate specialising in the area of leadership.   “EJ is an awesome guy to have worked for, he pushed us to be the best and brought the best out in us.  He is a world class business and sports man and it has been an honour to run this massive project for him and his wife Marie.”

In November, 2012, LUSH set sail from Southampton, UK, sailing south to the Canaries and then west across to Antigua in the Caribbean.  There, they joined 25 other Oysters and set off on the Oyster World Rally, January 6th 2013 sailing through the Panama canal, across the Pacific, sailing north of Australia and onto South Africa via the Indian Ocean.  The final leg brought them up through the South Atlantic and back to the Caribbean just over 13months later, completing their circumnavigation back  in Antigua.  LUSH was the first Oyster in the rally to finish (19th of February 2014).  They then spent a few months sailing and racing at some elite regattas in the Caribbean before their return journey to Europe.  On route back across the Atlantic they stopped off in the Azores before sailing onto mainland Portugal and Gibraltar in May.  The summer was spent cruising between France, Spain and some of the main Mediterranean islands.

Paul and Audrey have kept this blog over the duration of their trip and are thrilled with the response they have had from it.  In essence this blog transports it’s readers into life at sea, and life on the islands and countries Paul and Audrey explored along the way.

They certainly embody their moto of One Life… Live it!

Audrey reflects on the voyage…

This circumnavigation has been an invigorating, life changing adventure that has left me with a profound sense of awe, wonder and appreciation of this magnificent world, along with her cultures, people and wildlife. I thank Eddie massively for this opportunity to Circumnavigate Planet Earth, sailing west through the tropics, all the way around on this most exquisite yacht LUSH.”

The duo finished up onboard LUSH in mid September, 2014, after 22 months at sea and are currently writing a book about their epic voyage.  They  have a lot more content to add to this blog with thousands of photos, videos and stories yet to appear.  Paul and Audrey have also developed a unique and engaging motivational session for events and conferences.