Backtracking: 6 Weeks in Indonesia (Sept-Oct 2013) | Sailing West Around The World

As the end of August drew near it was time to say our goodbyes to Australia.  Our last port of call was Darwin in the Northern Terrority.  Boy were we nervy anchored in the harbour there dreading an attack from the famous salt water crocadiles each time we boarded our small tender.  The harbour police tried to settle my anxiety my ‘reassuring’ us that so far in 2013 they only counted 210 crocs in the harbour!!!  The day we arrived a local lad had been killed by one in a nearby river!!!  Full on!!  The Aussies are just sooo “supercool” about such things, no more than they are about their snakes and sharks!  And speaking of which we had plenty of those to keep us occupied on our next passage…..

Six tentonic plates meet in the SE Asia region, the Indo-Sinian plate, the Philippine Sea plate, the Pacific Sea plate, the Indo-Australian plate, the Australian plate and the Indian Ocean plate. This complex patch of water is know as the ‘shallow seas’ of the Sunda Shelf, which is made up of various seas all of which are less than 200metres deep.  This is certainly the worlds largest area of continously shallow water.  The Timor sea, between Australia and Indonesia is part of this shelf.  Our chart looked like it had hundreds of roller coaster tracks on it with deep ocean trenches and well ploughed furrows in between.  The chart itself wasn’t particularly acurate.  There was all sorts of sealife on route to Indonesia, from salties (crocs) to sharks and sea snakes galore.  A fasinating passage, for sure!  And as with all our passages into, out-of and around Australia we had a flying visit from the Australian Border control.  Unreal!  You think you’re in the ocean all on your own and next thing a plane flys by low beside our yacht followed by a call on VHF channel 16 with various security questions.  Impressive!

The Indonesian Archipelago has 13,677 islands (6,000 of which are inhabited) making it the largest island group in the world.   It is the worlds 5th most populated country with 240 million people.  Indonesians speak more than 757 languages!!  This sprawling archipelago certainly has the richest and most vibrant culture we have seen so far.  It is steeped in history and heritage and was certainly the most interesting country to arrive to by sea.. Sea life continues today much the same as it has for centuries, I don’t think the local boats have changed at all, sailing amoungst these beautiful traditional wooden boats certainly felt like a voyage back in time.

As usual on arrival we had to clear customs and emmigration.  Normally this involves 3-4 officials boarding the yacht and going through the necessary paperwork along with sealing our alcohol supplies, and sometimes checking what fruit and veg we have onboard from a biosecurity point of view.  In Kupang we didn’t have 4, not even 5,6 or 7 onbaord….. 20+ ‘officials’ boarded LUSH!!!  Paul had hoped he’d be able to run through the paperwork ashore but they insisted on all coming out to LUSH!!!  And when we offered them the norm soft drinks, tea or coffee they asked for beer!!  At the end of the day we have to do what they want in order to get our paperwork allowing us into the country.  We kept them all in the cockpit, only allowing 4 of them below deck to inspect LUSH.  The rest were happy-out drinking beer and taking pics.  You know as with everything on this trip you just have to embrace the moment and go with the flow, so we entertained our guests and had a good oul laugh with them all, singing songs, dancing, giving them some of our famed Red Bull tshirts etc.. etc.. till we acquired the necessary stamps!

From Kupang, (East Timor), we sailed onto Labuanbajo on the island of Flores to reprovision and prep before Eddie and Marie rejoined LUSH.  This place was a noisy  hive of activity with people, scooters and cars and dust everywhere.  It was a far cry from the tranquility of the Pacific islands thats for sure.  I had great fun stocking up on my fruit and veg at the market where I had to barter for everything.  I traded with sun hats, caps and the Red Bull tshrits, along with a few packets of seeds for differnt herbs from back home.  The latter fetched me some quality groceries in fairness!  They take cash too but rathered exchange for tangible goods.  What an experience!

My Aunt and Uncle, Eleanor and Kevin Moran, joined us for a week cruising the Komodo National Park.  They are both good friends of Eddie and Marie’s and they were actualy the ones who had recommended EJ to employ us back in 2011.  At that point Paul and I were back in Ireland, Paul running his sailing centre Sailing West along with motivational speaking and high performance coaching, and I was working as a dentist.  My Aunt never knew I harboured the ambition to sail around the World she just knew we were passionate sailors and that Paul had done alot of work for Oyster before setting up his own business.  So Eddie did his research on us and next thing we get a call of him offering us the job, which we hadn’t even applied for!!  He wasn’t to know this was an ambition we both had since we were kids but in fairness there’s not many people who would turn down a job like this!

Komodo is famous for it’s Komodo dragons, the largest recorded was 3metres in length and weighing over 150 kilos.  The islands have around 3,000-4,000 dragons and you need a guide with you when you go ashore to see them.  We went for a decent hike though one of the islands with a guide and on stopping for a snack a dragon came out of nowhere, charging at us for some of my famed flapjacks.  They have killed humans so we were pretty nervy and glad to see the back of him after our guide scared him off witha rather large stick!

From Komodo we cruised up to Sumbawa, anchored off a luxury resort had a stunning 5 star BBQ on the resort beach, chilled out for a couple of days before sailing onto Lombok.  We had plenty of wind during our time in Indonesia with a lovely seabreeze building by 11am each day and calm anchorages when the breeze droped in the evening.  Lombok is another hidden jewel of Indonesia, with pristine white beaches on a mountanious backdrop and fishermen everywhere whether standing in the water with their nets and rods or sailing solo on little sail-fishing boats along with literally thousands of other boats.  Out of everything I’ve ever seen on the water my whole entire life the sight of these boats was truly extraordinary.  I am not exagerating when I say there were thousands of them off the coast of Lombok, all dugout cannoes with stablising arms and the most colourful sails with one fisherman in each.  They go out to sea on the last bit of evening breeze, staying offshore fishing throughout the night and then returning with the seabreeze by mid morning.

Lombok isn’t the easiest place for anchorages and we first tried to anchor off the Gilli islands, beside it, but with wind against tide this was untenable and so we followed a local cruising boat into the most perfect of anchorages (which hadn’t been mentioned in our pilot book due to the amount of reef around it).  It was surrounded by a semi circle beach know as Sire beach with two of the best resorts in Lombok either end of it.  We must have been in this anchorage for 10 nights, and while we ventured off to the Gillies etc during the day we couldn’t help but return at night.  Each morning the sun rose over the top of Mount Rinjani and the morning mist would burn off.  The fishermen were in the water chest deep fishing and smiling, always smiling!  We ventured ashore for organic spa treatmants like no other and spicy local cuisine in the hotels.

Bali fully lived up to it’s reputation as a rich, vibrant and spirtual country.  From a sailing point of view though there’s not much you can do as there are no safe anchorages and only one marina on the island.  Somewhere that’s famous for surfing is unlikely to be suitable for anchoring a yacht safely, you can imagine why.  We parked LUSH up for a few days and ventured inland to sample it’s world famous culture and as with everywhere else in Indonesia it didn’t dissapoint. We prepped LUSH for our next offshore passage acrose the Indian Ocean and set our sails for the Coco islands.

One Life… absolutely lived and breathed it in Indonesia and it’s top of my list for somewhere to return to in future.  Even after 6 weeks there I felt we only got a small taste of what it and its people have to offer! The tectonic plates of Timor Sea! 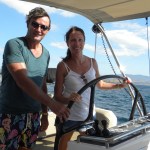 Audrey’s aunt & uncle Eleanor and Kevin Moran, good friends of Eddie and Maries, enjoying a week onboard the mighty LUSH! Massive thanks to them that we are here! Scooters: the only transport on one of the islands. Chef happy to have got a lift though with all that food in tow local lady selling at the market Pontoon off our beloved Oberoi hotel next to LUSH Fruit and veg galore at the local market Loads of the most colourful local sail-fishing boats! Big seaweed business, on small island next to Bali Paul with LUSH safely at anchor in the background. Beautiful anchorage all to ourselves as usual!