A flight to Sydney

Unfortunately, due to the time of year we couldn’t sail further south than Mac Kay as LUSH would have had to pound upwind into low after low on the East Australian coast!  What a killer!  It would have been spectacular to sail into Sydney Harbour, nonetheless we weren’t gonna give up the chance to see it while in Oz especially as my best pal, Emer and her hubby live there.

After sailing 16,000 nautical miles it felt a bit odd hanging around an airport and boarding a plane.  What a sight to behold flying in over this world famous harbour, following our 3+ hour flight.  At 19kms in length and covering 52 square kilometers, with numerous inlets and bays it truly is an awesome sight especially when you get your first glimpse of its two most iconic structures, the Sydney Harbour Bridge and the Opera House.

Emer and Robbie brought us to all the famous sights; we climbed the bridge, visited the Opera House, shopped in the Rocks, walked the 6km along the coast to Bondi beach and had numerous ferry rides back and forth in the harbour.  In the Maritime Museum we certainly didn’t pass on an opportunity to board the replica of Endeavour, Capt James Cooks boat.  Pondering life onboard in the 18th century certainly made us appreciate, all the more, what we have today.  It’s hard to imagine sailing unchartered waters doing an average speed of 4knots and eating sauerkraut daily.  Needless to say we’re very content with our 21st century Oyster 885 averaging 9 knots, charts galore and a daily menu to die for 😉 …. plus engine, VHF, sat phone, computers, shower, aircon, fridge, freezer, ice machine, etc…!  Only thing I reckon hasn’t improved is our lee cloths (apparently designed to keep us in our bunks when heeled), looking at the hammocks and the boarded-in beds (cots) on the Endeavour I’d say they might have had a better nights sleep… although without air-conditioning and showers I guess that’s debatable!  Luckily, Skipper didn’t get any ideas when he saw the cat and nine tails hanging in the crew quarters!  Sure the only person you’d need that for on LUSH is the boss, hardly for the tiptop, well-behaved crew and first mate onboard!

I really didn’t expect the city to be as awesome as it was, with the harbour such a massive part to it, it really was a shame we couldn’t have sailed there.

Emer and Robbie wined and dined us all week and boy did we eat in style.  One thing about the Aussies, they are serious foodies and yes we did put on the ‘Sydney stone’ while there… nothing an offshore passage with no chocolate or bread onboard couldn’t put right though!!.  Anyone planning hols to Sydney I would fully recommend dining at Café Sydney (book a window table for spectular views of the harbour bridge) and the French restaurant Felix.

Emer and I visited the Sydney Fish Market on the final day of hols.  This is the largest market of its kind in the Southern Hemisphere and the world’s second largest seafood market in terms of variety outside of Japan.  It’s a working fish market and we managed to sneak in to see the commercial auction first thing in the morn.  You can actually book a place to go on a tour of this but it was fully booked well in advance of our stay.  This market trades over 14,500 tones of seafood annually – with more than a hundred species of seafood traded daily!  I would highly recommend a visit whenever you go to Sydney.  After spending over three hours there and buying some tasty bits for lunch the only thing that bothered us was the cost of parking!!!  Now this is something I haven’t missed!!

Saying farewell is never much fun but with such super friends living there and it being such a magnificent city I know we’ll return again, hopefully next time it’ll be by boat.

One Life…. wining and dining it in Sydney! 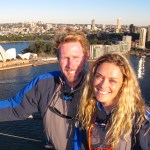 Paul & Audrey on the top of Sydney Harbour Bridge! 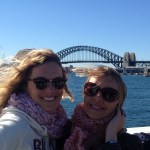 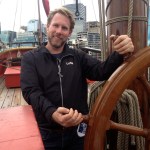 Paul on the helm of HMS Endevour 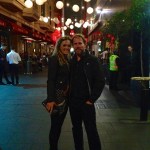 A night on the tiles 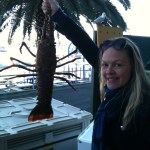 Emer with a massive lobster Audds with a massive crab!