We’re now over half way to the Marquesas in French Polynesia. Yesterday the southeast trade winds fully kicked in… at long last! The weather up to then had been very changeable with a lot of rain and squalls on a couple of the nights and all sorts of cloud to admire during the day… just not the dotted cumulus ones we were promised. Don’t get too concerned for us… we have had plenty of sunshine too just in this sailing business we need wind too.

St Patrick’s day was just mighty onboard. And yes we did break a few of our ocean sailing rules (you’re allowed break rules on St Patrick’s day aren’t ya?)….. well one rule in particular…… skipper allowed us a wee bit of alcohol!!….. so Dad cooked up his beloved porridge and raisins, as per usual, in the morn only this time he didn’t use milk……. Baileys cream liquor was the ingredient of choice and wow was it divine!!!! Ye’ve got to try it!!

In the afternoon we all had a half pint each of the good stuff (nicely chilled), which honestly I’ve never liked before but wow was it delicious. Maybe it’s just better in the heat! Needless to say we all had a little pep in our step after that and sure there was nothing for it but a good oul ceile on the aft deck!!! We might have been 9 thousand miles from home but it certainly felt like we were on a little Irish island in the middle of the South Pacific that day! I wonder what things would have been like if the paddies made it out here before Capt Cooke?!

Now, I guess ye’re wondering where we stand on the fish scoreboard front?….. well St Patrick brought us two fish on the 17th but there’s been nothing since…… which left the score at 7 – 3 to the fish…. However the lads have disputed this …… yesterday morn Al picked up a flying fish from the deck, which had landed overnight. Now this thing was smaller than a sardine! Anyhow, he fried it up and we all had a little taste. And now the guys have changed the scoreboard to 4 as they reckon the flying fish counts…. “It landed on the boat and was eaten therefore it’s a score!” they protested… so they’ve got me on a technicality… but seriously they really are getting desperate resorting to these tactics!

We had our halfway party a couple of days ago, which too, was a good laugh. The fancy dress code was toga… seeing as we were changing all sheets on the boat halfway it made sense. We blasted the music from Gladiator and sat around the cockpit table eating all sorts of fancy things from the galley!!

One Life folks….. deffo living it out here! 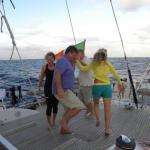 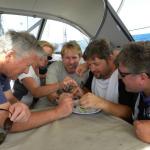 give us a bit of flying fish 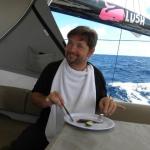 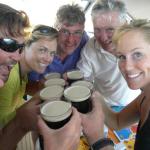